Reconstruction of the pillars of the First Pillared Hall in the tomb of Karakhamun is going incredibly well. the conservation team of Abdelrazk Mohamed Ali, Ali Hassan Ibrahim, Taib Hassan Ibrahim, Mohamed El Azeb Hakem, Hassan Dimerdash, Said Ali Hassan, Mohamed Badawy, Mohamed Shebib, Taib Said Mohamed and stonecutter Hussein Mohamed have finished the construction of five pillars. With three more under way we have a very good chance to reconstruct all the pillars by the end of the season. 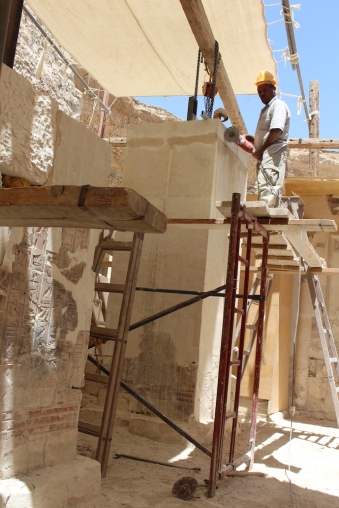 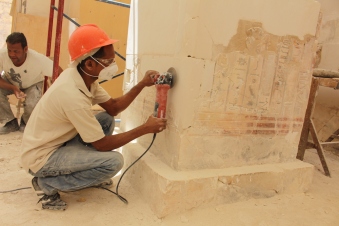 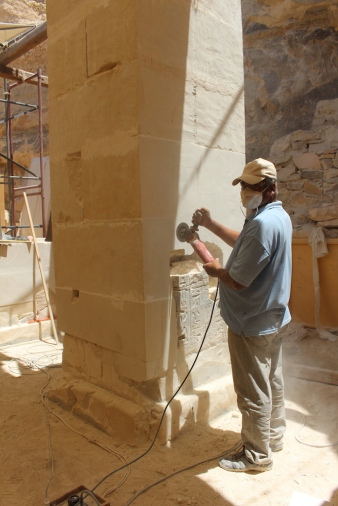 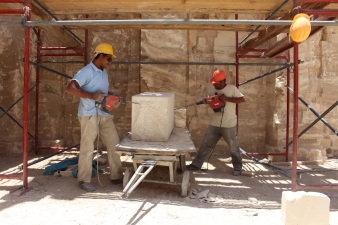 Reconstructed pillars such as the north-east pillar NP5 give our epigraphers a chance to keep adding more fragments any time they make new identifications. Erhart Graefe started adding new fragments to the text of the Ritual of the Twelfth Hour of the Day on the first day of his arrival and keeps a very fast daily pace. Mohamed Badawy and other conservators are only happy to help. 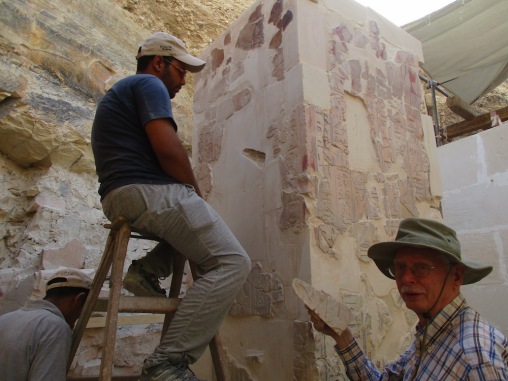 Annie Haward and Francesca Jones of the BD 17 team are having an amazing season this year. This is the first season when they started placing identified and joined fragments of the south wall of the First Pillared Hall with the help of Mohamed Shebib and Ahmed Hamdan. More on the achievements of the BD 17 team will follow in their own blog entry next week. 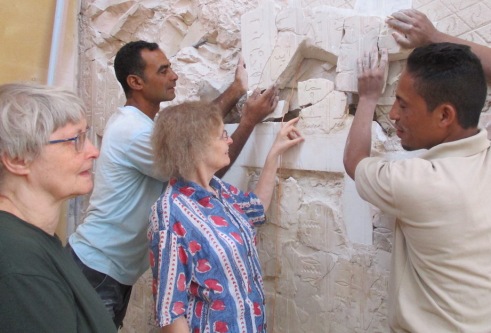 Marion Brew is celebrating the first glimpse of the cavetto on the south wall of the court in the tomb of Irtieru (TT 390). The quality of bedrock in this area didn’t allow for precision in carving and the cavetto was carved in sections from better quality limestone. The sections were placed on a nicely carved bedrock “shelf” and bonded with mortar. 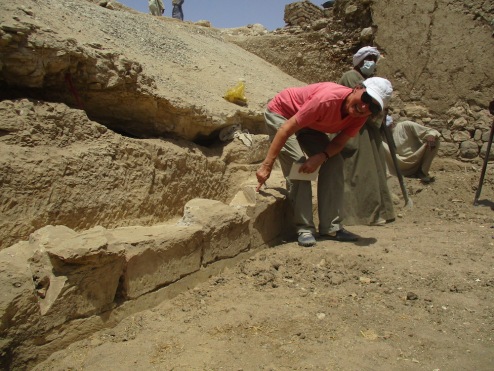 Inspectors Ahmed El Tayeb Mahmoud and Omar Fathy Hassan are assisting our architect Dieter Eigner in drawing the bricks of the superstructure in the tomb of Karabasken (TT 391). They are doing an amazing job measuring and recording every brick and area of mortar. 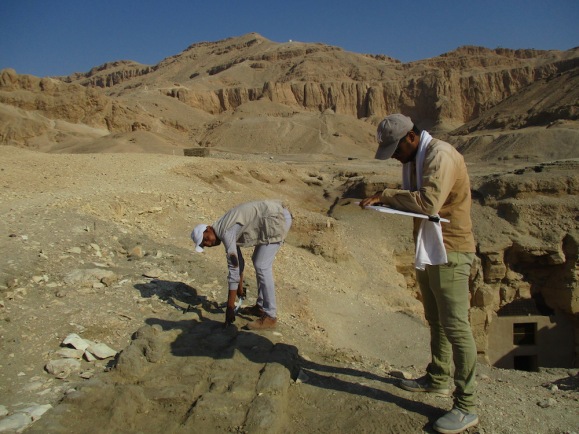 The diversity of our site allows every team member to find something really close to his or her heart. Salima Ikram is happily bonding with the skeleton of a cow. 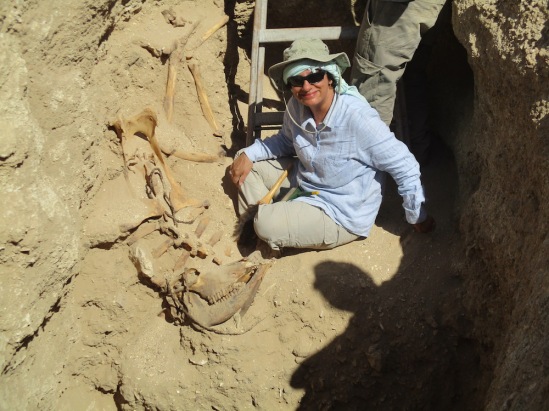 Katherine Blakeney spends her days under the painted ceiling in the tomb of Irtieru. 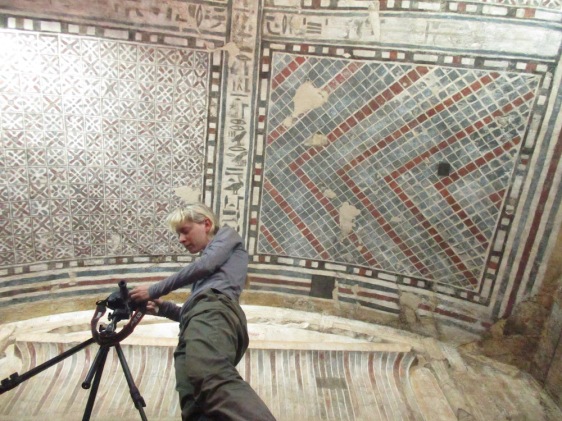 Our new volunteer from Swansea University, Laura Chilvers found her first join of two painted ceiling fragments from the tomb of Karakhamun. She is assisting Taylor Woodcock in putting the thousands of ceiling fragments together and has fallen in love with even the smallest of them. 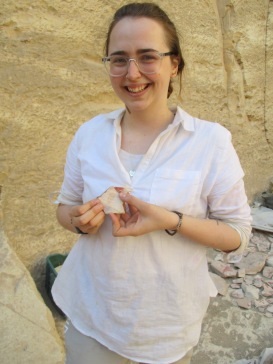 John Billman, a big admirer of objects, is enjoying the company of shabti fragments. John’s new assistant Aimee Vickery from Swansea University is learning the intricacies of stone fragment registration and doing a great job. 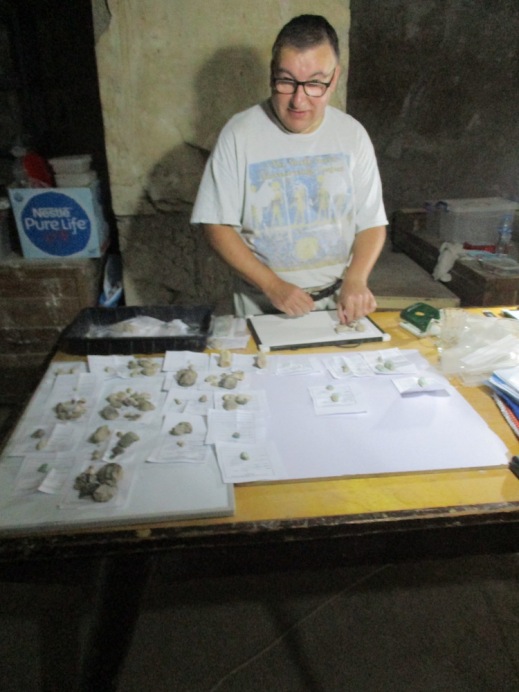 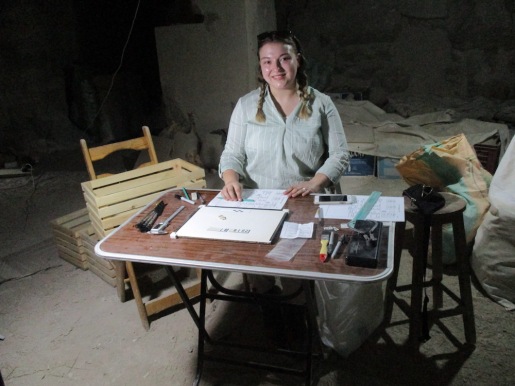 The team is happy and looking forward to every day of work. 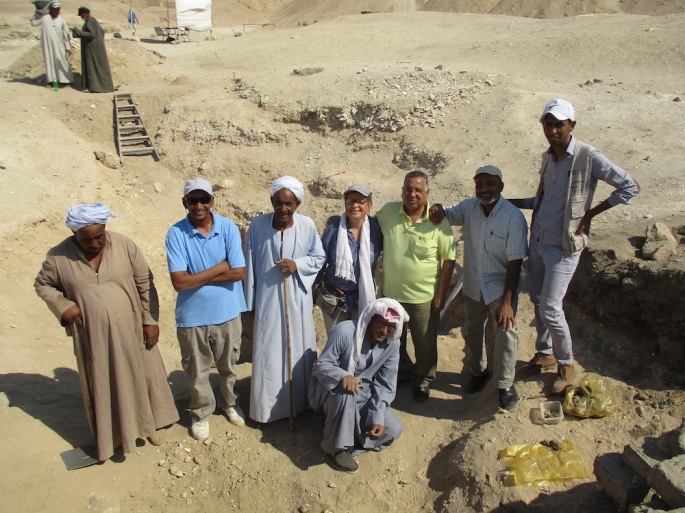 Katherine Blakeney is also looking forward to coming home after work to her new toddler Cesar. Cesar is now in this precious period of kittenhood when everything that happens around him looks enormously exiting. 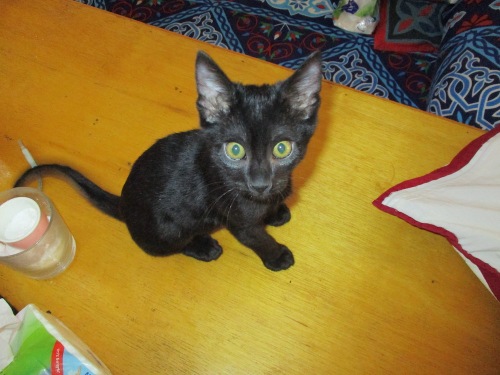