The work of the South Asasif team continues in all the areas of the necropolis with incredible results.

We had a wonderful breakfast with our workmen to celebrate the start of Ramadan.

The excavation team of Reis Mohamed Ali, Marion Brew, inspector Mohamed Khalifa Ahmed and Katy Bell are still following the remains of the northern wall of the superstructure of the tomb of Karabasken. The traces were almost lost on higher ground but recently resurfaced at a lower level of the terrain, with as many as three courses of the original bricks preserved in situ.

John Billman, the head of the object registration and catalogization project enjoys the recent finds in his “office” in the tomb of Irtieru.

Reconstruction of the Tornische area in the tomb of Karakahamun is also in full swing. Today was a big day of the arrival of the lintel carved by our stone cutters. A large group of builders, stone cutters and conservators watched its progress down into the court of the tomb and celebrated its arrival. The participants of this event on the photo are Ahmed Bedawy, Mohamed Gamal, Abd El Hady Abd, Hamdi Abdel Fatah, Ali Hassan Radwan, Ahmed Mustafa Maraa, Mohamed Ahmed Attia, Hassan Mustafa Ali, Hassan Dimerdash, Mohamed El Azeb Hakem, Ali Taib Mohamed, Abdelrazk Mohamed Ali. 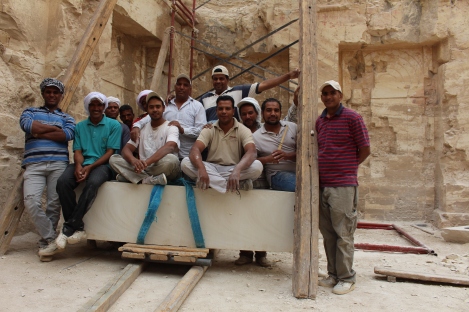 Members of the team BD 17 Francesca Jones and Annie Howard continue sorting the fragments of the text by column finding new joins in the process. In previous years they amassed a corpus of 135 fragments whose position can be identified in the 112 columns of the text. They explain the significance of the new join on the photograph above in their own words:

“Great excitement was felt earlier in the week, when we found a new piece with half each of a horned viper (I9) and a basket (V31) and a reed (M17) depicted, and were able to locate it to column 75. Not only that, but we already had another piece from the same column with half a horned viper and basket and a reed. A join! The photo shows us with this join, the first of two this week!

We would like to thank all the team for their help in locating possible fragments, and for helping to move the sometimes very heavy stones to where they can be worked on.”